The North American Mining Company, a subsidiary of the North American Coal Corporation, has walked a Marion 7820 Key-1 dragline, without a boom, under a pair of 550,000V power lines to a new phase at the CEMEX FEC Quarry in South Florida. Phillystran Aramid PSWR 1500 fiber ropes, with spliced ends, supported the dragline boom during the move under the power lines.

Normally the dragline move would involve either disassembling the machine or lowering the power lines to the ground allowing the dragline to carefully pass over them. “We considered both approaches, but neither was attractive due to the cost and disruption to power service or mining operations,” says Spencer Thompson, Maintenance Manager with North American Mining. “We decided to lower the boom and pass under the two 550,000V power lines. This had the advantage of speed as well as reducing the exposure of conductive steel wires to the power lines."

A +/- 0.5% (+/- 4inch) length tolerance is unprecedented for a spliced rope of this kind, achieving it reduced the risk to the boom during the move. 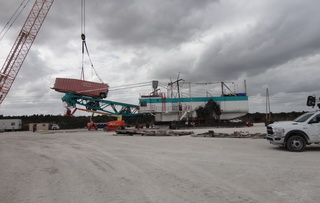